Could this be the best Nobel pairing ever?  (It's certainly a great one, and one of the best things to come out of 2020 so far...) Here's the announcement:

"The 2020 Sveriges Riksbank Prize in Economic Sciences in Memory of Alfred Nobel has been awarded to Paul R. Milgrom and Robert B. Wilson “for improvements to auction theory and inventions of new auction formats" https://www.nobelprize.org/

I've known Paul at least since 1978, when he attended a course I taught while on leave at Stanford, on Axiomatic Models of Bargaining. Bob advised both of our dissertations, although not at the same time.

Bob is a legendary advisor of grad students.  Paul is now the third of Bob's  students to win a Nobel.  So Bob is well established as the patriarch of a Nobel dynasty.

Here's another picture, from another celebration:

Bob Wilson being celebrated for the 2017 CME MSRI prize, by his students Al Roth, Paul Milgrom, and Bengt Holmstrom.

I've often blogged about  both Milgrom and Wilson, separately and together.
Here's a paragraph I wrote about Bob's work in our (only) joint paper, in which we interviewed each other:
How Market Design Emerged from Game Theory: A Mutual Interview
Alvin E. Roth and Robert B. WilsonJournal of Economic Perspectives—Volume 33, Number 3—Summer 2019—Pages 118–143
"Wilson (1977) introduced the model of common-value auctions (sometimes called the “mineral rights model”). The model and its equilibrium initiated a large body of theoretical, experimental, and applied work. One important insight from this model is that winning an auction contains “bad” news, since it implies in equilibrium that the winner’s estimate is the highest. In equilibrium, rational bidders fully account for this, but the paper raises the empirical question of the extent to which actual  bidders are able to fully discount for the fact that, if they win the auction, they likely overestimated the value of winning. Thus, Wilson’s work initiated a new research program on the winner’s curse, involving systematic overbidding compared to equilibrium, sometimes involving losses to the winning bidder. The private-value model of Vickrey (1961) and the common-value model of Wilson (1977) together form the basis of much of modern auction theory and practice, since most auctions have elements of both private and common value."
Right after that, Bob and I talked about important influences on our work. Bob included this:
"I was deeply affected in the early 1990s by working with Paul Milgrom on design of the FCC spectrum auctions. I marveled at his insights and creativity in constructing rules for a “simultaneous ascending auction” that would have good prospects of yielding an approximately efficient outcome in an environment afflicted with strong complementarities, dispersed private information about market fundamentals, and substantial market power."
To which I replied:
" I was also much influenced by Paul when we developed and co-taught what may have been the first courses in market design, in 2000 and again in 2001 when he was on leave at Harvard and MIT."
*********
Here's an old snapshot:
There's a rabbinical literature about the relationships between students and teachers. It often comes to mind when I think about how lucky I have been to have the students I've had. But today I'm reminded of my luck in having Bob Wilson as my teacher and friend, and Paul as my friend and colleague.
"Joshua ben Perahiah used to say: provide yourself a teacher and acquire yourself a friend. Judge everyone favorably." (Pirkei Avot, chapt 1 verse 6)
Here's how I recalled Bob as a teacher, in an autobiographical essay of a kind that they will each now be asked to write:
"Bob Wilson agreed to be my advisor and rescued me from having what looked to be a very short academic career after I failed one of my Ph.D. qualifying exams. He was on sabbatical that year, but met with me regularly once a week for an hour. In memory, our meetings followed a kind of script: I would spend a while explaining to him why I hadn’t made progress that week, and then he would spend a while telling me not to be discouraged. Then I would describe some roadblock to further progress, and he would, as we finished our meeting, recommend a paper for me to read. Because his recommendations had always been very much on target, I would go straight from his office to the library and start to read the paper. As I did, I would think, this time Bob made a mistake, this paper has nothing to do with my problem. But then, somewhere in the middle of the paper would be a lemma or remark that helped me get around that roadblock …"
*************
And here's a final picture from Stockholm in 2012, of me and Emilie and Paul and Eva, with Parag Pathak (one of Bob's academic grandchildren) in the  background. 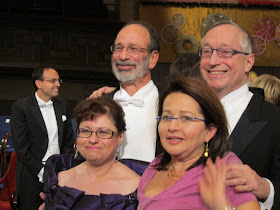 “for improvements to auction theory and inventions of new auction formats”

“This year’s Laureates in Economic Sciences started out with fundamental theory and later used their results in practical applications, which have spread globally. Their discoveries are of great benefit to society,” says Peter Fredriksson, chair of the Prize Committee."Learn more in the popular information